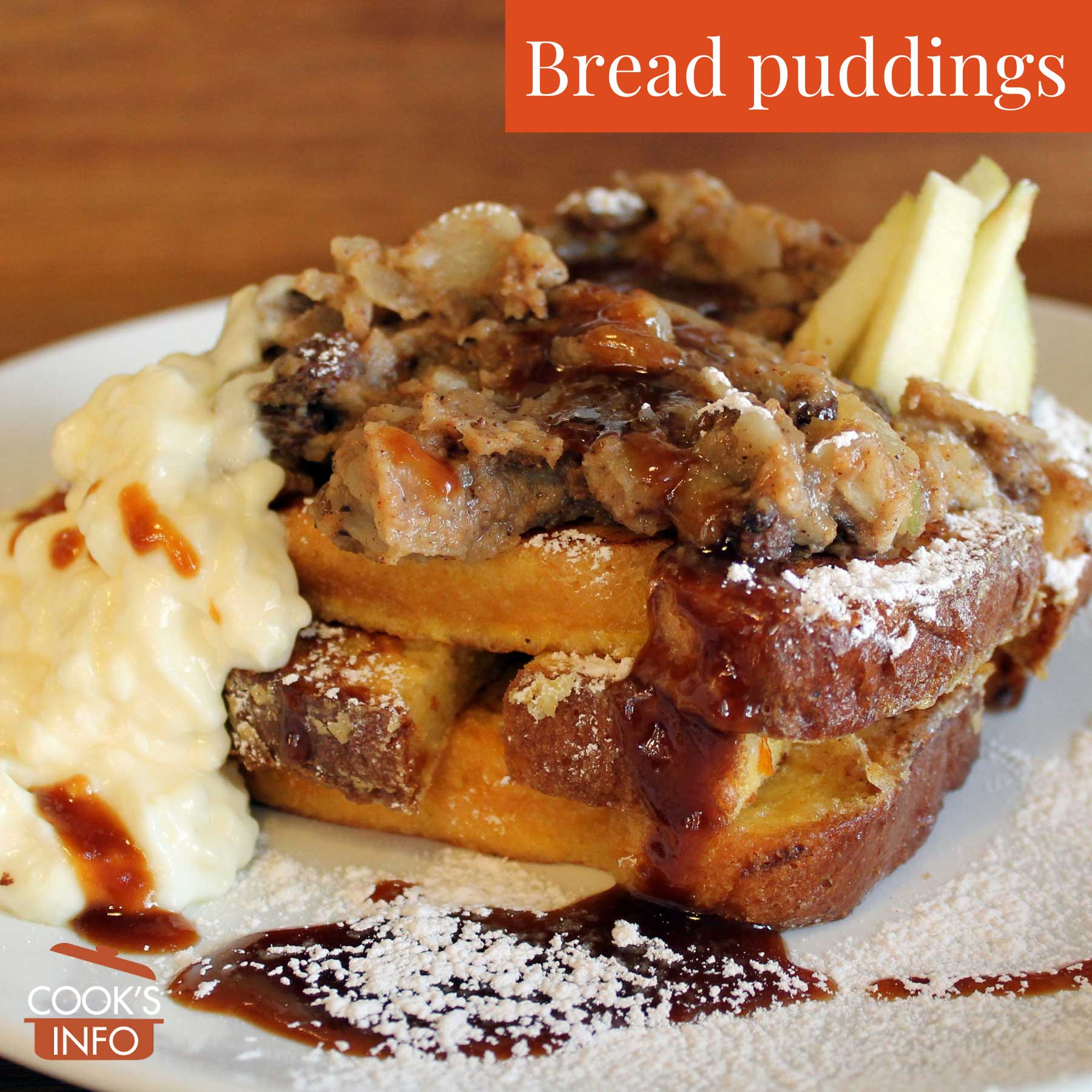 Bread pudding is a pudding made from bread, typically leftover or stale bread. It is typically baked but there are a few examples of unbaked ones.

It is made in various cuisines: Argentine, Belgian, British, Creole, French, Hong Kong, Malaysia, Mexican, Southern US, etc. In fact, it was very prevalent in all cultures that made bread as a way to use up stale bread.

Most people, when they think bread pudding, think of the sweet versions of it, but there are also savoury versions that can serve as side dishes, or the main part of a meal with a vegetable or salad as a side. A good bread pudding has very rich flavours and each bite should melt in your mouth.

Any bread can be used, though it is usually bread made with white flour: brioche, challah, croissants, Italian or French stick, raisin bread, panettone, scones, etc. While stale bread is ideal. Discard bread with any trace or whiff of mould to it.

Pre-sliced commercial sandwich bread may not work the greatest, as it lacks body and may just dissolve on you. But it can be used — if you are using it, just skip any pre-soaking called for in the recipe, and do any mixing gently. Most people leave the bread crusts on the bread — after all the point is to use up leftover bread, not create more.

If the bread is very stale, it may be soaked overnight first to soften it, either in water or milk. However, it should rarely be necessary to soak the bread overnight, unless you are using dried bread. Instead, if time allows, just let the bread stand a bit in any milk and egg mixture that the recipe calls for so the bread can soak some up before cooking. The very poor would just soak their bread in water, then sweeten and flavour it with what they had to hand.

The bread used can be in the form of slices, chunks or crumbs.

There is very little “poor” about today’s recipes for bread puddings. Now the bread is essentially mixed into a rich custard of milk and eggs. Though vanilla extract is common for flavouring in sweet bread puddings, anything can be added for flavouring. An alcohol such as brandy, bourbon, rum, Cointreau, Triple Sec, etc., can give it a very rich taste. Citrus zest is often called for to lighten the taste further. Usually a fat is called for, such as butter, margarine, lard, suet or shortening. Other ingredients in sweet bread puddings can include fruits — fresh, dried or candied, nuts or jams, etc.

Bread pudding can be served warm, room temperature or chilled, though it is usually served warm. Savoury ones are always served warm.

In the UK, bread and butter pudding is slices of bread that are buttered, placed in a baking dish, then sprinkled with raisins and covered with a milk and egg custard, then baked.

Sweet bread puddings can be served with a syrup sauce or a fruit sauce. They can be served dusted with icing sugar. Recipes often call for whipped cream, ice cream, or a pouring cream as a further accompaniment. 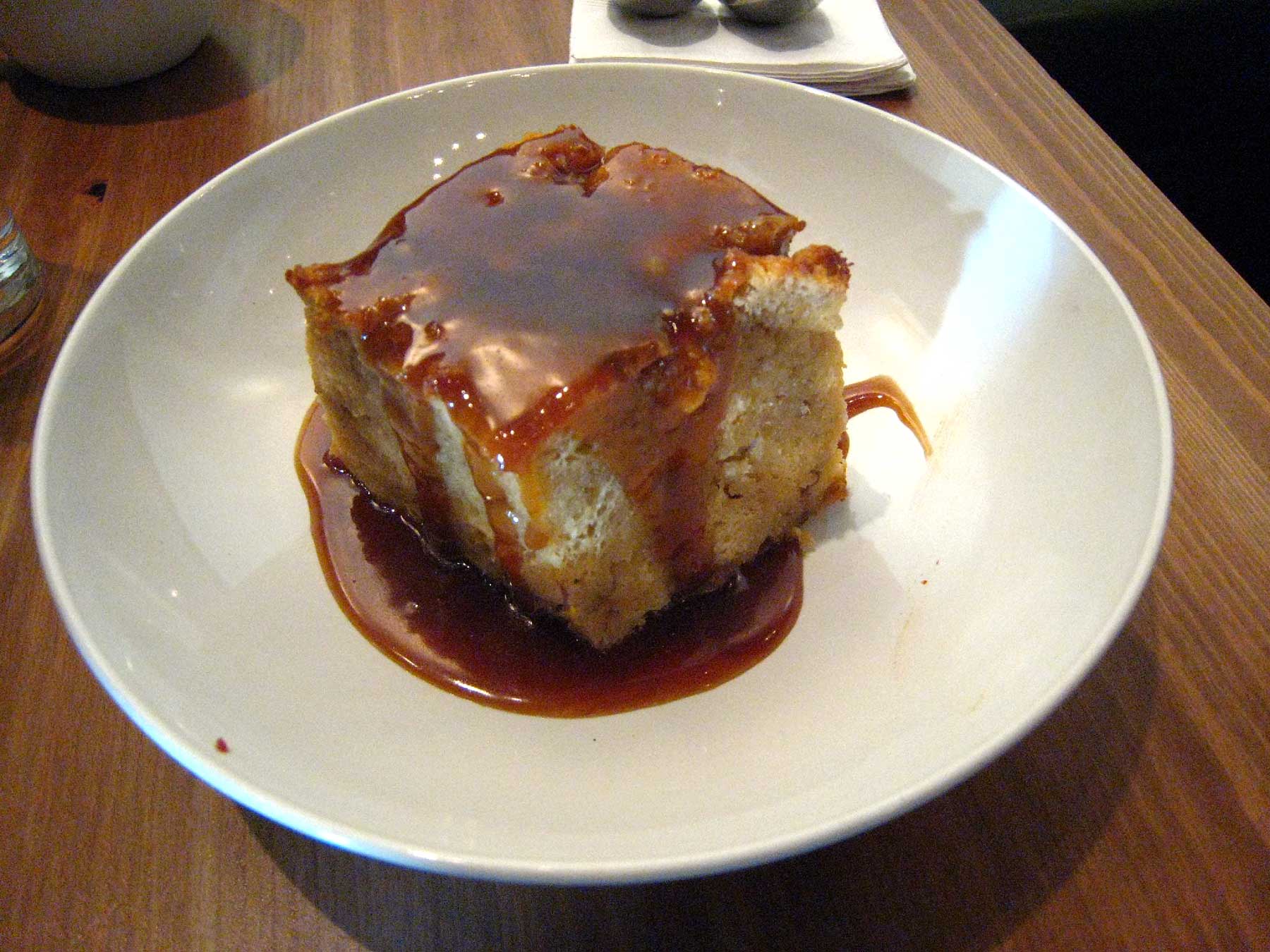 If recipes call for cream, you can usually just swap in milk: you may wish to either increase the eggs by one, cut back a bit on the quantity of milk, or increase cooking time a bit.

“A bread pudding: Cut off all the crust of a Penny white loaf and slice it thin into a quart of new milk, set it over a chafing dish of coals, till the bread has soaked up all the milk, then put in a piece of sweet butter, stir it round, let it stand till cold, or you may boil your milk, and pour over your bread, and cover it up close, does full as well; then take the Yolks of six eggs, the whites of three, and beat them up, with a little rosewater, and nutmeg, a little salt, and sugar, and if you choose it, mix all well together, and boil it half an hour.” — Hannah Glasse. The Art of Cookery, Made Plain and Easy. 1747.

“Bread pudding: Grate the crumb of a stale loaf, and pour it in a pint of boiling milk, let it stand an hour, then beat it to a pulp; add six eggs, well beaten, half a pound of butter, the same of powdered sugar, half a nutmeg, a glass of brandy, and some grated lemon-peel; put a paste in the dish and bake it.” — Mary Randolph. The Virginia Housewife. 1824.

“Poor Man’s Bread Pudding: Pour boiling water over half a loaf of stale bread, and covering it up closely, let it remain until thoroughly soaked; then squeeze it in a towel until half the water is out; put it in a bowl, and sweeten with brown sugar to the taste; add, while hot, a large tablespoonful of butter; flavor with grated nutmeg, a spoonful of brandy, ditto of rose-water; add some stoned raisins. It should be put in a well buttered baking dish about an inch deep, and should bake four hours in a slow oven.” — Sarah Rutledge. The Carolina Housewife. 1847. [Ed: The poor man in question seems expected to have a lot of expensive ingredients to hand!] 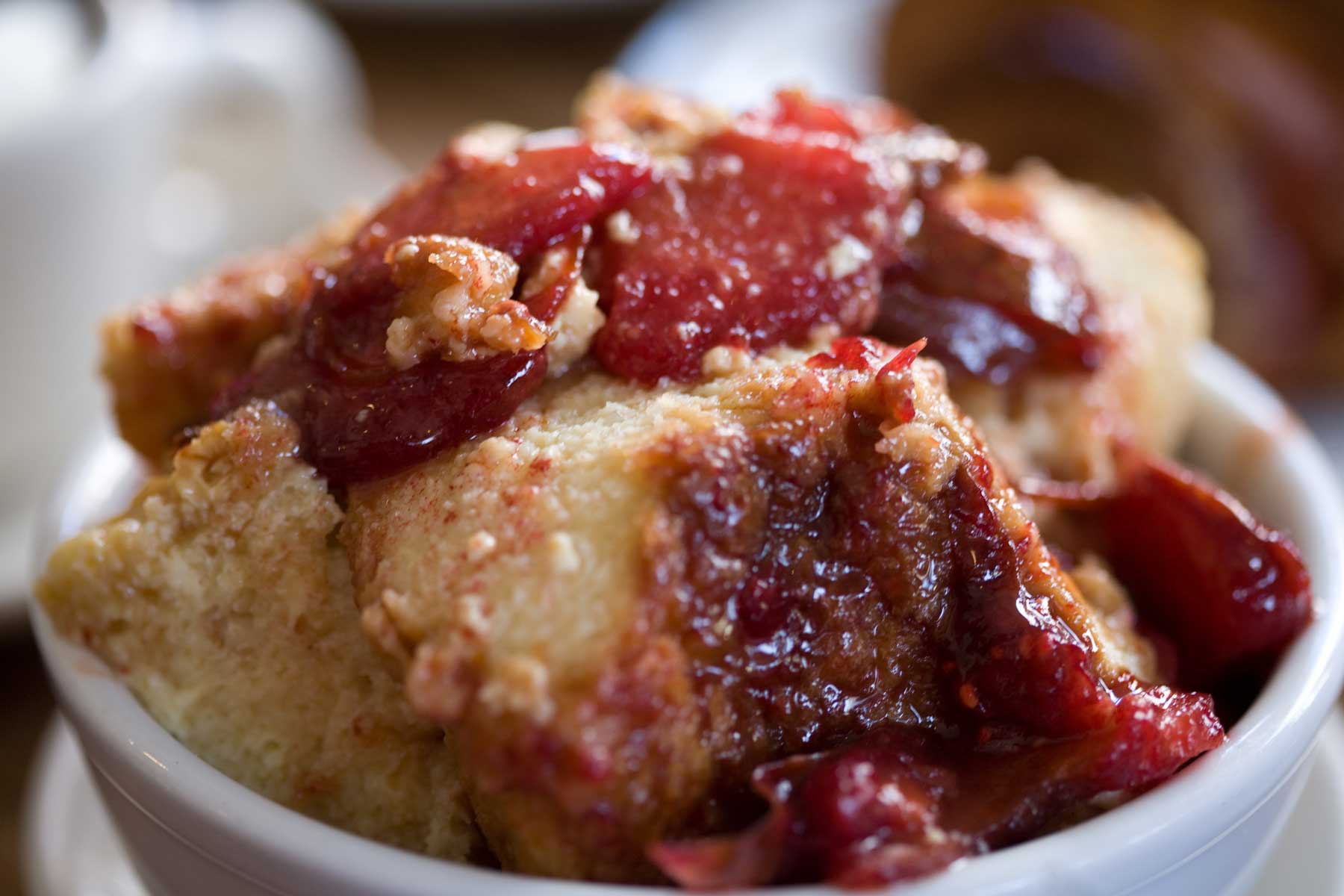 This web site generates income from affiliated links and ads at no cost to you to fund continued research · Information on this site is Copyright © 2021· Feel free to cite correctly, but copying whole pages for your website is content theft and will be DCMA'd.
Tagged With: Bread Dishes, Bread Puddings