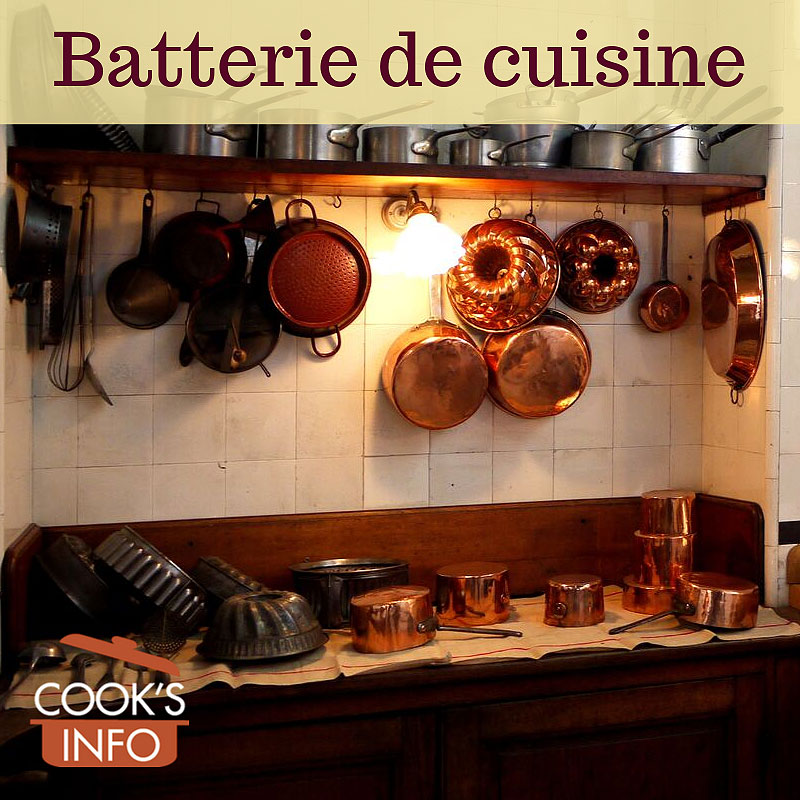 Here, “batterie” is what is called a “faux ami”, a French word that means something different than it appears to. It doesn’t mean “battery” in the energy sense, as in a car battery, but rather in an “assault” sense, such as is preserved in the old legal expression “assault and battery.” It implies perhaps the savage battle that can sometimes take place in the kitchen.

The expression is taken to mean a collection of essential tools that you need to be an efficient and good cook.

Needless to say, opinion varies as to what should be included in the collection. Some people would put a dishwasher right up there as number 1 on the list. Some people now feel that a microwave is an essential item, other people think a pressure cooker is an important element.

Some people feel that an important aspect to a Batterie de Cuisine is how your tools are laid out and stored as well — are they easy to reach without a lot of fuss? Though a food processor might be now considered a foundation stone of many people’s Batterie de Cuisine, chances are it isn’t one of yours, if it’s stored on a high shelf that you have to borrow a step-ladder to reach, or is buried way back behind a dozen other things.

Surprisingly, most specialized, single-purpose tools don’t rate on most peoples’ lists of a Batterie de Cuisine. Sometimes, a more efficient Batterie de Cuisine can be one that has fewer well-chosen items rather than a lot of things, if only because the smaller number of items can be more easily stored in a way that makes them accessible on a moment’s notice.

Most people, though, who love cooking have a hard time keeping their Batterie de Cuisine down to a bare minimum. Like golfers or sports fisherman, there’s always something to tempt them or to make them think that this will be the item that changes everything. Men are the ones most likely to add more gadgets.

Ironically, in a professional kitchen, you are less likely to see the array of gadgets that you see in a kitchen store. In a large, commercial kitchen, gadgets often just go missing in action, tossed by mistake into the garbage with potato peelings as often as not, or they can’t stand up to the beating.

Note that the term covers tools, rather than ingredients. While a good stock might be a vital element in a cook’s bag of tricks, food items are not generally considered to be covered by the term.

There tends to be a core of list of things that Western cooks can more or less agree on as essential, followed by a list where consensus starts to breaks down.

Not included in either list are some things that everyone takes for granted as “infrastructure”: a stove, a fridge, some kind of freezer, running hot and cold water, lighting and ventilation.

Many people agree on the following kitchen tools as basic:

Items that people will debate about how essential they are “in a desert island situation” include:

Asian cooks would have a lot of other essentials in their Batterie de Cuisine, including: