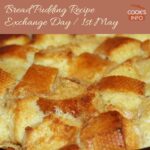 This is it, the big day. All across America right now, people are visiting, phoning and emailing friends and neighbours to exchange their bread pudding recipes.
01 May -- May Day 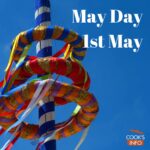 May Day celebrations were a big holiday during the Middle Ages. The trunks of very tall trees were used as May Poles and would be painted and decorated.
02 May -- Truffles Day
The 2nd of May is marked as Truffles Day. The reference is to the truffles that are like mushrooms, rather than the chocolate ones.
05 May -- Cinco de Mayo 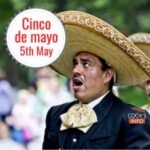 The 5th of May commemorates a Mexican victory over the French army in 1862 at the Battle of Puebla.
07 May -- Roasted Leg of Lamb Day
In the northern hemisphere, it's now warm enough to do roast a leg of lamb out on your backyard grill, especially if you have a spit. And in Australia, where it's autumn, today is a good excuse for an all-out roast dinner.
10 May -- Shrimp Day
On the 10th May 2004, Long John Silver's restaurant served free jumbo shrimp to customers. They were making good on their offer (made on 15 January 2004) to serve free shrimp if NASA found (which it did) conclusive evidence of oceans on Mars.
13 May -- Apple Pie Day 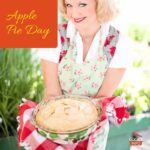 It's hard to know why anyone would pick May for Apple Pie Day, when apples are not in season (in the Northern Hemisphere, at least) .
13 May -- Mother's Day
The first American Mother's Day proclamation was in 1870 in Boston by a Julia Ward Howe. Her intent was that women's peace groups would use the day to call for disarmament and peace.
16 May -- St Honoré's Day
St Honoré is the Patron Saint of bakers. He is also the Patron Saint of confectioners, pastry chefs, flour sellers, and candlemakers.
17 May -- Constitution Day 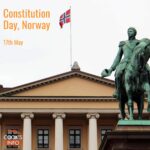 The 17th of May is Constitution Day in Norway. It is a very big event in Norway, celebrated even in small villages.
19 May -- Devil's Food Cake Day 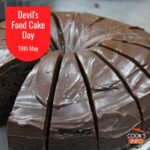 When's the last time you have Devil's Food Cake? Maybe Devil's Food Cake seems quaint now, but for decades, it was the big thing.
20 May -- International Pickle Week
International Pickle Week is a 10-day long promotional period held in America each year, usually in May. It spans the American Memorial Day weekend, which is the start to summer in the US.
21 May -- Strawberries 'n Cream Day
The 21st of May is Strawberries 'n Cream Day. You can celebrate with fresh strawberries, or make up a dish by folding strawberry jam or thawed frozen strawberries into a whipped cream.
21 May -- Victoria Day
Victoria Day celebrates the birth of Queen Victoria on Monday, 24 May 1819. It is celebrated in both Scotland and in Canada.
22 May -- Vanilla Pudding Day
Celebrate Vanilla Pudding Day by whipping one up from scratch or from a powdered mix, or by just whipping open a pudding pak on the run. Vanilla pudding is not really known in England, the closest thing is custard, but never mind: they have crème caramel,
23 May -- Taffy Day
Taffy Day is officially recognized in America by the National Confectioner's Association of America. This differs from National English Toffee Day, which they say is 8th January.
24 May -- Escargot Day
Escargot had their heyday in the 1970s, when everyone ate them with garlic butter and bought the Escargot dishes for home use.
28 May -- Hamburger Day
The 28th of May is Hamburger Day. White Castle hamburger chain in America hosts the Crave Time Cook Off each May.
30 May -- Shavuot
Shavuot is a Jewish harvest festival. The date in the Gregorian calendar varies by year; it marks when the first of the harvests of wheat and fruit were brought to the Temple in Jerusalem.