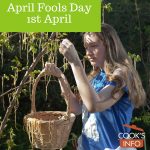 April's Fool Day is a day traditionally for playing tricks on others. The tricks are meant to be harmless tricks, aimed particularly at fooling someone into believing something that isn't real.
01 April -- Brillat-Savarin Birthday 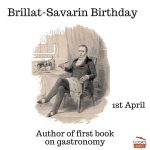 On this day in 1755, Jean-Anthelme Brillat-Savarin was born in France. He wrote the first book about the pleasures of food, published in 1825.
01 April -- Easter Sunday 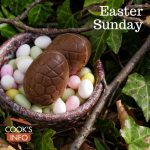 Easter Sunday is the day when the church celebrates the resurrection of Jesus Christ. Food-wise, it is celebrated with great feasting and special foods.
02 April -- Carob Bean Day 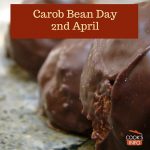 Carob may look like chocolate and be marketed like chocolate, but one taste and you know the old saying is true: sometimes beauty really is only skin deep.
02 April -- Easter Monday 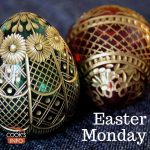 The date for Easter Monday varies wildly every year. It is the Monday immediately after Easter Sunday.
02 April -- Hare Pie Day
Hare Pie Day takes place in Hallaton, Leicestershire on Easter Monday. It appears to have started in 1770.
03 April -- Easter Tuesday 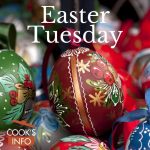 Easter Tuesday is the day after Easter Monday. There are several rituals involving food, candies and treats in many parts of Europe.
07 April -- Coffee Cake Day 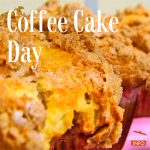 The 17th of April is a good day to learn what Coffee Cake actually is -- and treat yourself and a friend to a slice while you're at it.
07 April -- William Keith Kellogg's Birthday
William Keith (aka WK) Kellogg was born 7 April 1860. In 1894, William, together with his brother John discovered Corn Flakes.
10 April -- Bananas in London 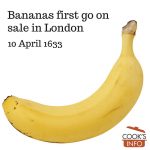 Bananas made their London Debut on 10 April 1633 in a shop window. It was the shop window of shopkeeper Thomas Johnson, who had a herbalist shop on Snow Hill in the neighbourhood still called Holburn.
11 April -- Cheese Fondue Day 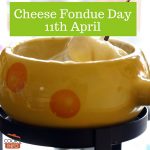 Finally, a holiday to celebrate stale bread and melted cheese!
12 April -- Liquorice Day
Liquorice Day is sponsored by the company called "Licorice International" as a way to promote true liquorice (much liquorice made today is actually flavoured with anise, as opposed to liquorice root.)
13 April -- Catherine de Medici's Birthday 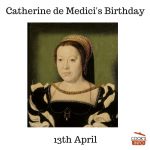 Catherine de Medici was born in Florence, Italy, and became Queen of France. She is credited with many food innovations. Today is her birthday.
14 April -- Pecan Day
The 14th of April is the day to treat yourself to a piece of Pecan Pie, and learn all about Pecans right here on CooksInfo.com while you're at it. That being said, we're not at all certain why it's Pecan Day.
15 April -- Glazed Ham Day
The 15th of April is Glazed Ham Day. You usually only get to glaze a ham on high holidays such as Christmas and Easter, when the pressure is on:.
15 April -- Sinking of the Titanic
On this day in 1912, the Titanic sunk. The Titanic almost seems like it was one big floating restaurant.
16 April -- Eggs Benedict Day 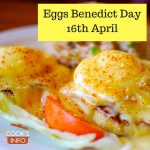 The 16th of April is Eggs Benedict Day. This breakfast dish is a real treat, so go ahead and treat yourself today!
17 April -- Cheese Ball Day 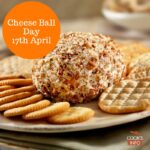 Many foodies hate cheeseballs, regarding them as very tacky! But today's a day to celebrate these concoctions in all their "cheesiness"!
19 April -- Garlic Day
The 19th of April is Garlic Day. Don't worry about your breath today; no one will notice because everyone else will be eating it too -- apparently.
20 April -- Pineapple Upside-Down Cake Day
Wow, when's the last time you had Pineapple Upside-Down Cake? Few cakes are as spectacular as this cake.
21 April -- Damson Day 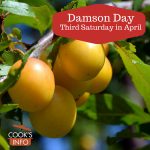 The Third Saturday in April is celebrated as Damson Day in the Lyth Valley in Cumbria, England.
22 April -- Jelly Bean Day
The 22nd of April is Jelly Bean Day. The question in most people's minds is, though, is why on earth is it so close to Easter in some years? Who needs any more sugar at this time of year? Maybe it's a reminder to include Jelly Beans in your Easter Candy,
23 April -- Bavarian Beer Purity Law Day 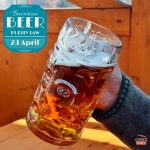 The Bavarian Beer Purity Law (Reinheitsgebot) is a law that governs what ingredients can be used for beer made in Germany. Many alcohol aficionados, particularly beer enthusiasts, will know about this already.
23 April -- Shakespeare's Birthday
William Shakespeare was born on this day, the 23rd April, in 1564 . On this same date in 1616, 52 years later, he would also die.