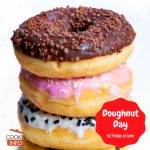 Doughnut Day is the first Friday in June each year. Many people avoid doughnuts on a regular basis, but today might be a good day to treat yourself.
01 June -- Duck Feast 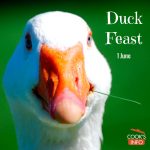 The Duck feast is held every year on the 1st of June at the Cat Inn, in the village of Charlton, Wiltshire.
03 June -- National Egg Day
The challenge for today, National Egg Day is to make a meal around eggs. Breakfast if you want, but higher points are awarded to those who make eggs the main course for dinner!
05 June -- Gingerbread Day
The 5th of June is Gingerbread Day. Gingerbread is more traditional at Christmas or during the winter, when the warming effects of the spicy ginger could be most appreciated.
08 June -- Carême's Birthday 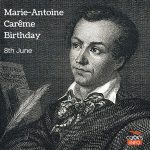 On this day, 8th June, in 1784, a boy named Marie-Antoine Carême was born. He would become the world's first celebrity chef, and codify French cooking in a way that still serves as a foundation today for European cooking.
08 June -- Medard of Noyon
Medard of Noyon is the Patron Saint of brewers and good harvests. He is sometimes depicted with a giant eagle hovering over his head to shelter him from rain, while others around him got wet.
09 June -- St Columba's Day
St Columba was reputedly born 7 December 521 in what is now County Donegal, Ireland. He founded a monastery on Iona Island, off the west coast of Scotland.
12 June -- Taco Day
There is actually a great deal of varying opinion as to when Taco Day actually is. Competing dates include 16th April, 11th June, 12th June and 4th October.
13 June -- Lobster Day
Internet greeting card sites give 13 June as Lobster Day, but don't try to make sense of the date. It's not necessarily tied to any particular area where lobster fishing is open at the time.
17 June -- Eat Your Vegetables Day 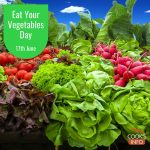 No excuses for anyone not having veggies today! Every year on the 17th of June is Eat Your Vegetables Day.
18 June -- International Picnic Day
When's the last time you had a picnic? If you can't remember, then maybe it's been too long. Round up some friends and / or family, and make an occasion of it.
19 June -- Martini Day
The 19th of June is Martini Day -- and, reputedly, International Martini Day at that! If it's been ages since you've had a Martini, pay a visit to an old friend. Can't think of anything to celebrate with a Martini? Have one or two and something might come to mind...
21 June -- Midsummer Night 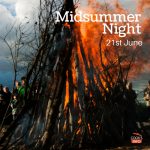 "Why, this is very midsummer madness." -- William Shakespeare, Twelfth Night. Still celebrated traditionally on the 24th of June, Midsummer Night now actually occurs on the 21st of June owing to how the astronomical equinox has shifted forward several days over the centuries. It was a very important pagan holiday.
24 June -- Québec National Day 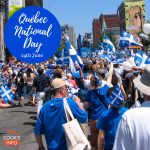 The 24th of June is the national day of Québec, and an official state holiday there, with everyone getting the day off work. The actual name for today is St-Jean-Baptiste Day (St John the Baptist Day) or Fête Nationale des Québecois (Québec National Celebration).
28 June -- Cakes and Ale Day 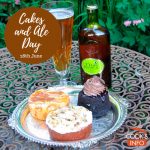 Cakes and Ale Day is a yearly event held in Bury St Edmunds, Suffolk, in south-eastern England. A man named Jenkyn Smith left money for Cakes and Ale to be served.
28 June -- Tapioca Day
The 28th of June is Tapioca Day, even though a small dissident, break-away group says it is on the 15th of July. Some people will want to give this holiday a miss, no matter what day it's on, because they can't get past the taste or look of tapioca.