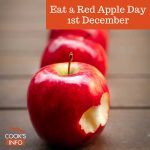 Today's a good day to make it a point to have a red apple!
02 December -- Fritters Day
What's not to like about fritters? Small cakes of dough fried up in butter or oil, hmmm. Fritters can be savoury or sweet.
02 December -- St Bibiana's Day
St Bibiana, aka Saint Viviana, is the Patron Saint of Drunks. Bibiana's family were Christians in Rome during the persecutions of the Emperor Julian.
06 December -- Gazpacho Day
Our traditional concept of Gazpacho involves tomatoes, and tomatoes certainly aren't at their best or cheapest at this time of the year anywhere in the Northern Hemisphere.
06 December -- St Nicholas Day
St Nicholas, aka Sinterklaas, is the protector of children. As Sinterklaas, he brings gifts for them in the Netherlands.
08 December -- Brownie Day 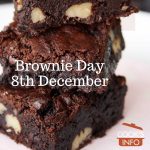 Brownies are relatively easy to make and as such, they are a good way to get those old grey cells limbered up for the serious baking that lays ahead in the next few weeks.
13 December -- St Lucy's Day
In Sweden, today is called Luciadagen. It marks the start of Christmas celebrations in Sweden, and the start of a festival of lights.
17 December -- Saturnalia 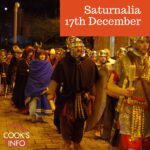 Saturnalia in Rome was a week-long winter celebration, during which the Winter Solstice occurred. It was celebrated for over 500 years.
18 December -- Bake Cookies Day 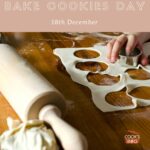 Bake Cookies Day is a good time to get the last of your Christmas baking done, if you're so inclined.
22 December -- Forefather's Day
Forefather's Day is celebrated in the New England area of America to commemorate when the pilgrims landed on 21 December 1620. It's particularly marked in Plymouth, Massachusetts, with ceremonies jointly led by the Old Colony Club and the Mayflower Society
23 December -- Tom Bawcock's Eve
Tom Bawcock's Eve is celebrated in the village of Mousehole (pronounced Mowzel) in Cornwall, near Penzance, England. A fishing village of winding, narrow streets, Mousehole is the place most closely associated with Stargazey Pie on account of the Mousehole
24 December -- Egg Nog Day

Nobody really needs a reminder to have Egg Nog at this time of year, but perhaps it's a reminder to get your fill while you still can.
25 December -- Christmas Day 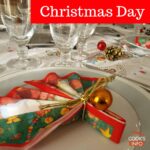 The early Church in Jerusalem celebrated Christ's birth on the Epiphany (6th January.) In the final quarter of the 4th century , the Jerusalem Church switched to the practice of the Church in Rome of celebrating it on the 25th December
26 December -- Boxing Day 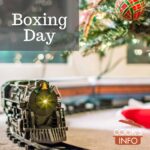 The 26th of December, the day after Christmas, is an official holiday in the Australia, Canada, New Zealand, and the UK.
26 December -- Candy Cane Day 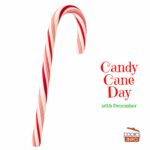 The 26th of December has been dubbed Candy Cane Day, though no one seems to know quite by whom. Perhaps it was some mother, starting to panic over how many candy canes from this year would be left over.
26 December -- Kwanzaa
Kwanzaa is a week-long festival that starts 26 December and goes until 1 January. It is an American-invented holiday now being promoted as a world-wide holiday (some wags joke that it was invented by Boxing Day deprived Americans.)
30 December -- Bicarbonate of Soda Day 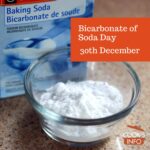 The plainer name for Bicarbonate of Soda Day is really just "baking soda day", but though sadly that doesn't have the same cachet, does it? To mark the day, you could bake something that uses baking soda.
31 December -- Hogmanay
Hogmanay, New Year's Eve in Scotland, is arguably a bigger date in the Scottish calendar than Christmas -- so big, that people even have the 1st and the 2nd of January off of work in Scotland. Any household chores that have been started have to be finished