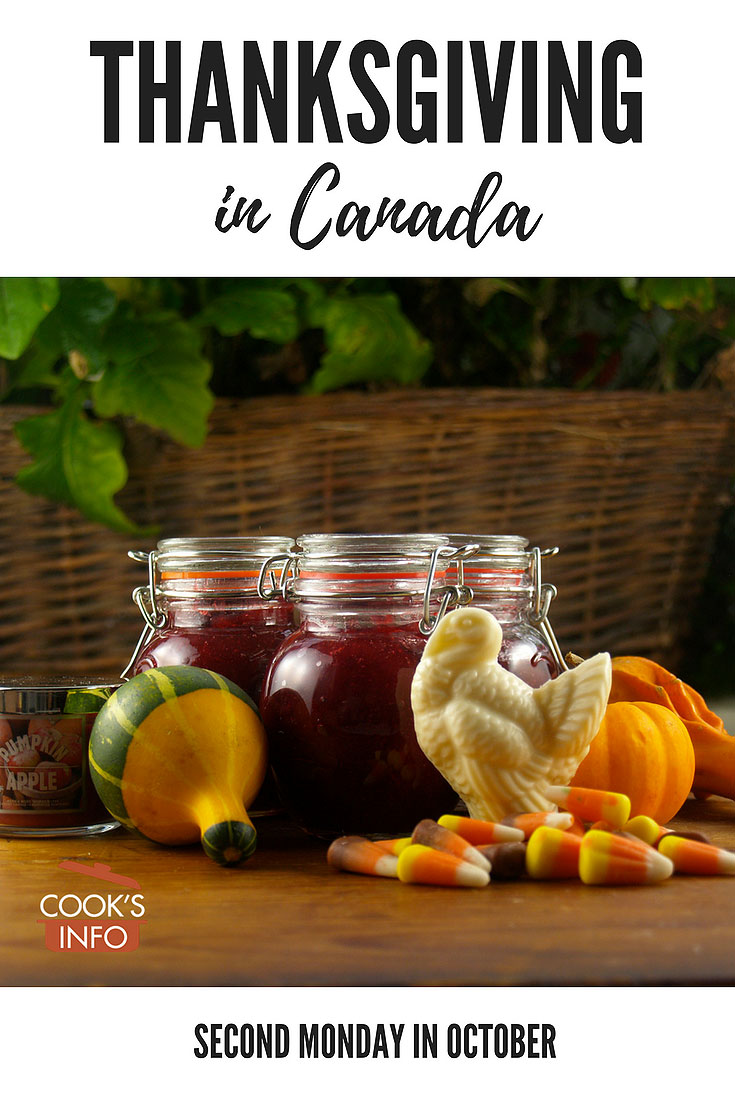 Thanksgiving in Canada is observed on the second Monday of October.

In the Canadian mind, while Labour Day at the start of September marks the end of summer, Thanksgiving at the start of October is treated socially and food-wise as the start of autumn, and is linked with Hallowe’en (which comes about two weeks later) as a fall festival. Outdoor decorations on front lawns easily slide from an uncarved pumpkin and Indian corn sitting on a bale of hay for Thanksgiving to a carved pumpkin and a skeleton sitting on the same bale of hay for Hallowe’en. Thanksgiving weekends are often spent either cooking, or readying gardens and outdoor summer facilities for the winter ahead. 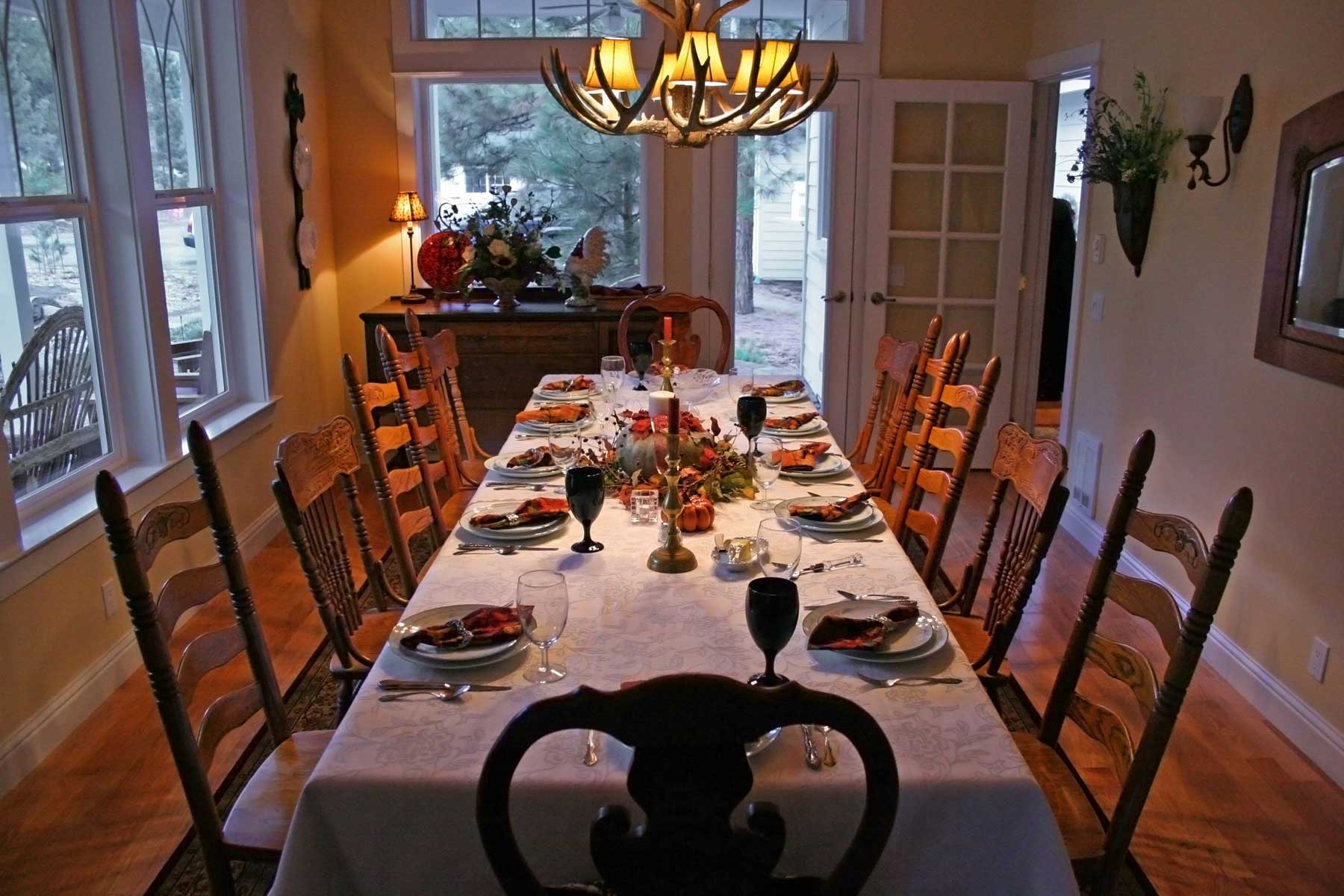 A lower-key treatment of Thanksgiving

In Canada, Thanksgiving is missing the frenzied hoopla that the Americans attach to it. It’s a low-key, relaxed weekend to enjoy an autumn long weekend, ideally with some nice Indian summer weather attached to it, and topped off at some point by a really good meal.

It is a long-weekend food festival to celebrate the harvest. Though religious in origin, it is now largely secular and celebrated by people of most faiths and cultural origins.

It’s officially on a Monday to make a long-weekend, and is a paid-day off for everyone.

Many Canadians hold the big meal on the Sunday evening whenever possible, and treat Monday as a day of leisure and leftovers, rather than face the dread of a big kitchen cleanup on Monday evening before returning to work on Tuesday morning.

Components of a Thanksgiving meal in Canada

In “size”, the meal usually comes close to rivalling Christmas in terms of food, preparation and quantity of food. In Canada, Thanksgiving and Christmas are the two big food “high holidays”.

In style, the meal is a “roast dinner” type meal, with a central piece of roasted meat and lots of side vegetables.

The central joint of meat is typically a turkey. Sometimes ham or roast pork may be served instead of turkey, for variation. 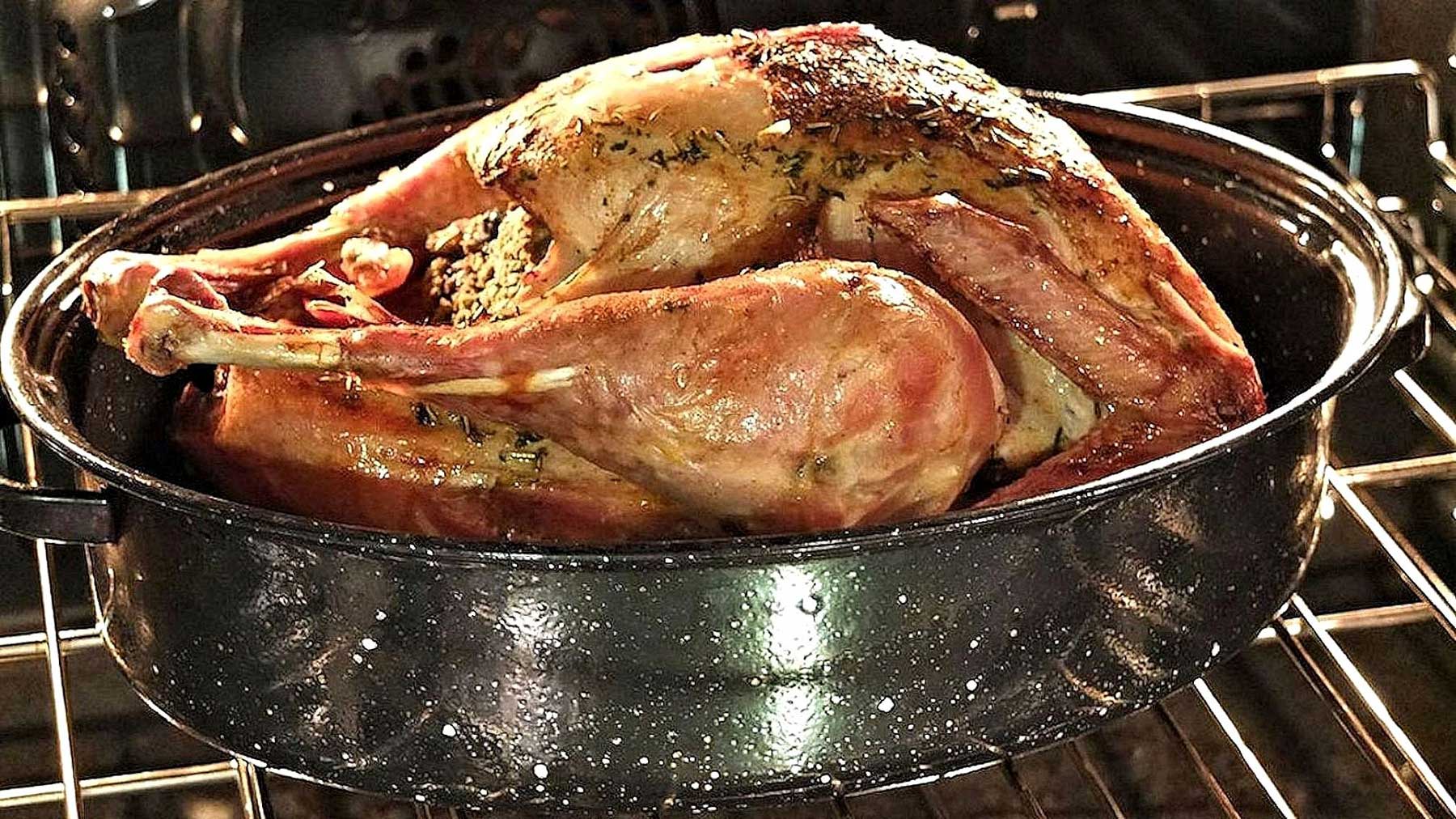 Side dishes for the big meal include stuffing, gravy, cranberry sauce, sweet potatoes or squash, mashed potato, Brussels sprouts, etc. The American classic Thanksgiving side dishes of sweet potato casserole with marshmallows, and green bean casserole with canned mushroom soup, never gained much mindshare in Canada, perhaps because the companies that invented those recipes didn’t promote them in Canada as they did in the U.S.

Rarely are the side dishes soaring gourmet creations in themselves, unless you are dining with foodies, and then you may encounter “Roasted Heirloom Squash with Mushrooms and Montaña Cheese Fonduta Filling” or “Boreal Cranberry Wild Rice and Birch Syrup Pilaf”, as some New York Times writers thought were traditional Canadian Thanksgiving dishes. [1]Levin, Dan and Ian Austen. Favorite Thanksgiving Recipes From Across Canada. New York, New York: The New York Times. 7 October 2016. Accessed September 2021 at https://www.nytimes.com/2016/10/08/world/canada/favorite-thanksgiving-recipes-from-across-canada.html Rather, they tend to be simple and relatively unadorned. The squash may have brown sugar or maple syrup on it, the stuffing may have some wild rice in it, the cranberry sauce may have a splash of booze. But overall, there are just so many different things to be cooked that a solo cook doesn’t have the time to futz to any length over any particular one of them.

There may be several desserts, possibly including butter tarts, but traditionally there will almost always be pumpkin pie as well. The pumpkin pie is often garnished with a drizzle of maple syrup (as well as whipped cream.) 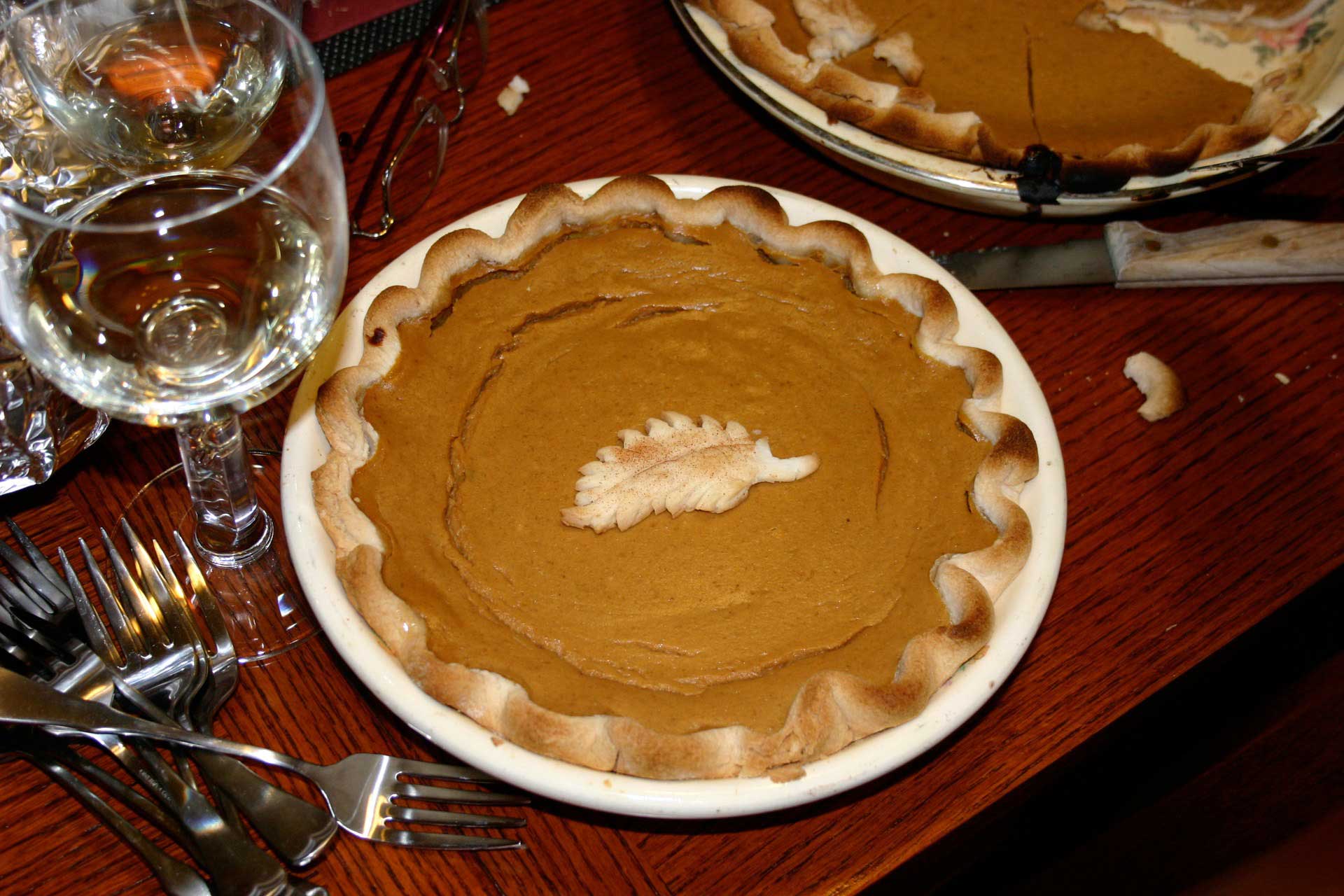 The turkey chain in North America

In North America, the turkey selling and eating season kicks off in Canada with the October Thanksgiving there. It then moves south to the States, for the Thanksgiving there at the end of November. It then swings back up to Canada for Christmas, where turkey is far more popular for a Christmas meal than it is in the States: after all, Americans have just had turkey, whereas Canadians have had a two-month break from it.

The Anglican Church began celebrating an end of harvest service in 1843 [2]Reverend Robert Hawker in Morwenstow, Cornwall. It is still held on the Sunday near or of the Harvest Moon, which every third year is in October, otherwise at the end of September.

A harvest Thanksgiving has been formally and regularly celebrated in the third week in November in the US since 1863 following a presidential decree by Abraham Lincoln.

In 1879, the Canadian Parliament in Ottawa began to follow suit with the yearly proclamation of a Thanksgiving to be held at the end of November.

In 1902, Parliament shifted the date to October.

In 1921, Canada moved back to observing Thanksgiving in November. However, it was moved to the start of November, and was combined with Armistice Day to be a joint holiday on the Monday of the week in which November 11 occurred. [3]The Armistice Day Act of 1921 (moved by MP Herbert Macdonald Mowat of Ontario) aimed to create a single long weekend for both Armistice / Remembrance Day and Thanksgiving by holding both on the same day, a Monday. However, the practice of combining the very two different moods proved unpopular with the public.

With it being a harvest festival and with Canada’s more northerly harvests occurring earlier than American ones, it could perhaps easily be argued that it just made sense to move the date back forward into October. But, Thanksgiving wasn’t set in law: it still had to be routinely proclaimed each year by the government.

In 1957, Thanksgiving was finally passed into law as a formal, permanent holiday on the second Monday in October, with paid leave from work. You can view online the Canadian Thanksgiving decree. 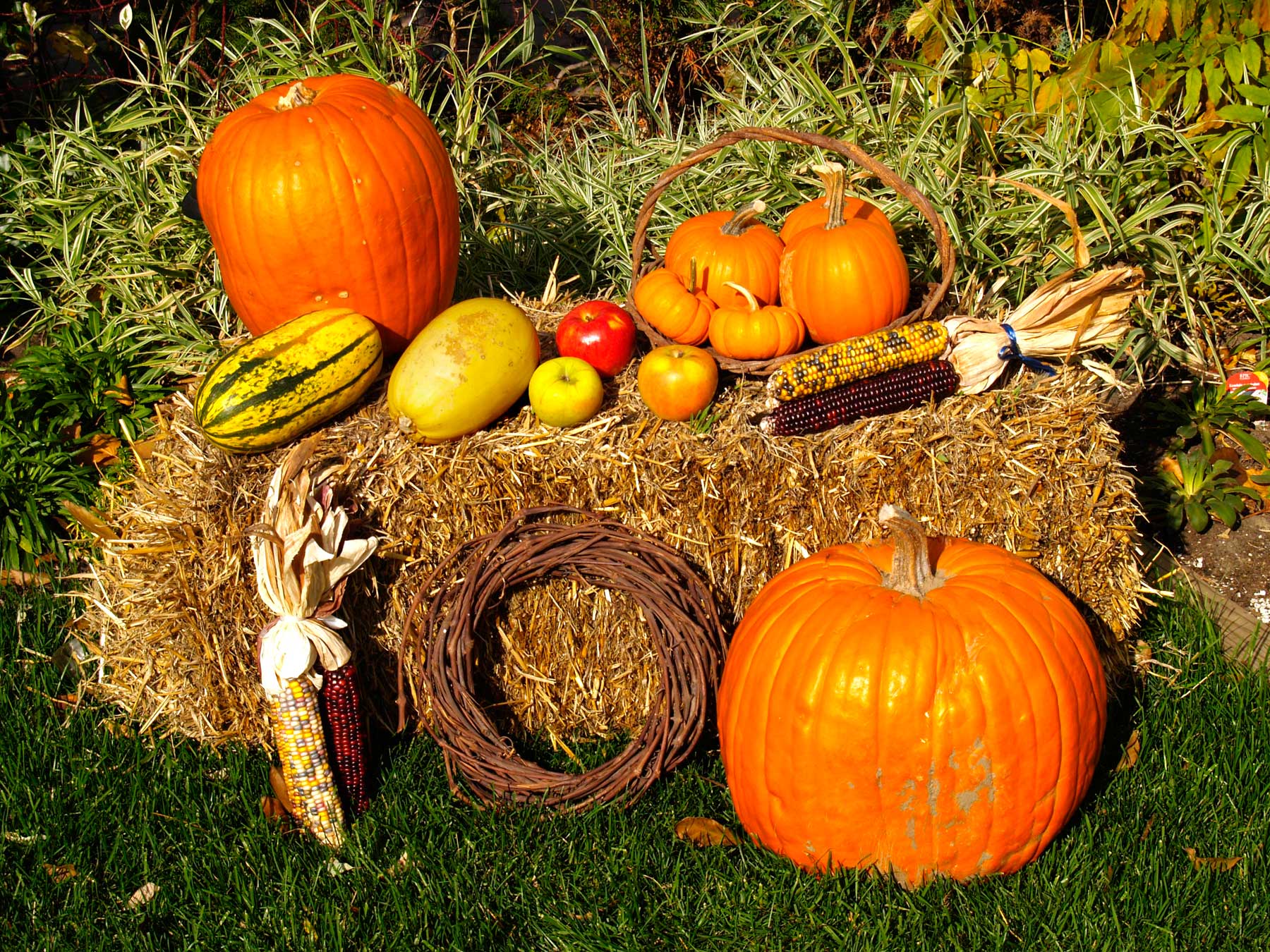 Prior unofficial Thanksgivings in Canada

Some Canadians from time to time have pointed to Thanksgiving having English origins in the Book of Common Prayer’s “Harvest Service.”

Some sources maintain that the first (European-settlement based) ceremony of Thanksgiving in Canada that we know of could be that which was held in Frobisher Bay by the explorer Martin Frobisher in August 1578. That could, however, be said to be stretching the point. It was definitely a one-off occurrence, not something that was even known about let alone repeated by others. And, it was just a religious service (Anglican communion), with no record of a special meal or special rations involved, and from the sounds of the account some “sailorly” drinking involved before and after the service.

Some people like to include the “Ordre de Bon Temps” (“Order of Good Cheer”) started by the French in 1604 at Port Royal, Nova Scotia, as another Thanksgiving example, but it was a dining and entertainment club, often celebrating daily during the winters. Though, when the colony was captured by the English in 1710, a day of thanksgiving was declared further south in the colonies of Massachusetts and New Hampshire. [5]Donald Chard. Canso, 1710-1721: Focal Point of New England-Cape Breton Rivalry. Nova Scotia Historical Society. 1975. p. 50.

It was not until 1879 that a “Thanksgiving Day” was more routinely tied back in with the harvest festival.

“… Uppon the one and thirtith of July, he recovered his long wished porte after many attempts, and sundry times being put backe, and came to anker in the Countesse of Warwicke’s sound [Ed: eastern side of Frobisher Bay], in the entrance whereof, when he thoughte all perill past, he encountered a great iland of ise, whyche gave the Ayde suche a blow, having a little before wayed hir anker a cocke bill, that it stroke the anker flouke through the shippes bowes under the water, whych caused so greate a leake, that with muche adoe they preserved the shippe from sinking.

At theyr arivall heere, they perceived two shippes at anker within the harborough, whereat they began much to marvel, and greatelye to rejoice, for those they knew to be the Michaell, wherein was the Lieutenant generall Captayne Fenton [Ed: Edward Fenton (d. 1603)], and the small barke called the Gabriell, who so long tyme were missing, and never hearde of before, whome every man made the last reckning, never to heare of agayne. [Ed: Frobisher had 15 ships in total on this expedition.]

Heere every many greately rejoysed of their happie meeting, and welcomed one another after the sea manner, with their great ordinance, and when eache partie hadde reaped up their sundrie fortunes and perils past, they highlye praised God, and altogither uppon their knees gave hym due, humble and harty thanckes, and Mayster Wolfall, a learned man, appoynted by hir Majesties [Ed: Elizabeth the First ] Councell to be theyr minister and preacher, made unto them a godly sermon, exhorting them especially to be thankefull to God for theyr strange and miraculous deliverance in those so dangerous places, and putting them in mynde of the uncertainetie of mans life, willed them to make themselves alwayes ready as resolute men to enjoy and accept thankefully whatsoever adventure his divine Providence should appoynt.” Collinson, Richard. The Three Voyages of Martin Frobisher: In Search of a Passage to Cathaia and India by the North-West, A.D. 1576-8. Cambridge University Press. 2009. PP 251 – 252.

The day of Thanksgiving held in Halifax in 1763 was in fact held throughout the British North American colonies as an observance of the peace that had been finally signed between Britain and France.

(a) “Read a letter from the Earl of Egremont, one of his Majesty’s Principal Secretaries of State, dated the 20th of April, 1763, signifying the King’s commands, that this Board should give the necessary directions for the due observance of a day of thanksgiving in the colonies for the happy conclusion of peace; and the draught of a circular letter to the Governors and Commanders in Chief of the respective colonies, in obedience to the said orders, having been accordingly prepared, was agreed to and ordered to be transcribed.” — ‘Journal, April 1763: Volume 70’, Journals of the Board of Trade and Plantations, Volume 11: January 1759 – December 1763 (1935), pp. 353-359. URL: http://www.british-history.ac.uk/report.aspx?compid=77437 Date accessed: 11 October 2014.

(b) “Monday, October 17, 1763. Present:—Earl of Hillsborough, Mr. Jenyns, Mr. Bacon, Mr. Yorke. Read a letter from the Honourable Major General Gage, Lieutenant Governor of Montreal, to the Board, dated July 31st, 1763, informing them that he had appointed a day of publick thanksgiving to be observed… Read a letter from Colonel Burton, Lieutenant Governor of Trois Rivières, to the Board, dated August the 2nd, 1763, acquainting them that a day of publick thanksgiving had been observed on account of the peace.” — ‘Journal, October 1763: Volume 70’, Journals of the Board of Trade and Plantations, Volume 11: January 1759 – December 1763 (1935), pp. 385-401. URL: http://www.british-history.ac.uk/report.aspx?compid=77443 Date accessed: 11 October 2014.

(c) “Read a letter from Benning Wentworth, Esquire, Governor of New Hampshire, dated the 14th of August, 1763, acknowledging the receipt of the Board’s letters on the appointment of a day of thanksgiving for the peace….Read a letter from Horatio Sharpe, Esquire, Deputy Governor of Maryland, dated the 28th of July, 1763, acquainting the Board with his having received their letter of 29th of April, last, and appointed a day for a publick thanksgiving for the peace.” — ‘Journal, November 1763: Volume 70’, Journals of the Board of Trade and Plantations, Volume 11: January 1759 – December 1763 (1935), pp. 401-413. URL: http://www.british-history.ac.uk/report.aspx?compid=77444 Date accessed: 11 October 2014.
Journal, November 1763

(d) “Peace having been proclaimed in 1763, the 28th day of December of that year was solemnized at Halifax as a day of thanksgiving on account of the termination of the war.” — Akins, Thomas B. History of Halifax City. Halifax, Nova Scotia. 1895. Chapter IV. Page 60.

Afterwards, from time to time, on various days for various reasons (including endings of war, disease, accession of monarchs, etc) days of Thanksgiving were proclaimed by various governments in Canada. [6]Proclamation and Observance of General Thanksgiving Days and reasons therefore. Canadian Heritage. Government of Canada. 2009-03-11. Retrieved October 2014 from http://www.pch.gc.ca/pgm/ceem-cced/jfa-ha/graces-eng.cfm